Click here to delve into the main highlights of Union Budget 2023-24.

For establishing unique identification of every single person, UIDAI (Unique Identification Authority of India) on behalf of government of India created a centralised database for collecting biometric and demographic data of residents, and issued a unique 12- digit number known as AADHAR Number. Aadhar is a proof of identity and address, valid for lifetime. It is issued in the form of a letter which is delivered via post to the address mentioned in the application.
Read Below to know more about Aadhaar Card.

What is Aadhar Card?

India is the second largest populated countries in the world with a population of more than 1.2 billon individuals. In such a large country, a need was felt to identify each individual for various financial and welfare services. As such, the Government of India launched the concept of Aadhar Card. Aadhar, also called as the Unique Identification Number (UID), is a 12-digit unique identification number which is allotted to individuals who apply for it. The record of each individual’s biometric and demographic data is stored in the Aadhar Card which can be easily accessed using the unique Aadhar number.

The Unique Identification Authority of India (UIDAI) is the main agency which operates under the Government of India and is tasked with the job of issuing Aadhar Cards to individuals. UIDAI collects the biometric and demographic data of the applicants and stores it in a centralised database. After the data is collected and verified, a unique Aadhar number is issued which is printed on the Aadhar Card. The card also contains the name, address, date of birth, gender and other details of the cardholder. Moreover, there is a QR code in the card which can be scanned to access the details of the cardholder easily.

What is Aadhaar Card Number?

Aadhaar card is a 12 digit unique number provided to every Indian resident who gets himself registered for it. Under its process, demographic as well as biometric information of the residents is taken such as name, date of birth, address, all ten fingers’ fingerprints, both eye iris scan, and a recent photograph. After completing the whole process, you get a 12 digit unique number that can be used as identity and address proof.

A public or private entity can accept the Aadhaar number as an identity proof of Aadhaar number holder. It is also used for verification of the identity of a person who is receiving subsidies or Government services.

Here are some of the salient features of Aadhar Card –

Benefits of having an Aadhar Card

Though having an Aadhar Card is voluntary till now, there are various benefits which you can avail if you have an Aadhar Card. These benefits include the following.

How to enrol for Aadhar Card?

The process to apply for Aadhar Card is as follows –

Who can enrol for Aadhar Card?

After you apply for Aadhar Card, it takes some time for the UIDAI to allot you the Aadhar number. Moreover, additional time is taken for the actual Aadhar Card to reach your home. Meanwhile, you can check the status of your Aadhar Card application online. The process of checking the status is as follows –

Here are the different processes of linking Aadhar to various avenues –

It often happens that we forget or lost our EID or UID. But there is nothing to worry you can still retrieve lost EID or UID by following some simple steps:

You can order reprinting of your Aadhar card in case you have lost aadhar. Just visit https://resident.uidai.gov.in/ then click on “My Aadhar” and choose”Order Aadhar Reprint” form the dropdown, then fill the required details and its done.

Virtual ID is a temporary 16-digit no. which is aligned with your Aadhar Card.It can be used in lieu of aadhar whenever e-KYC is required. You can get your Virtual ID thorough surfing on https://resident.uidai.gov.in/ >My Aadhar> Aadhar services>Generate VID> its done.

e-KYC is shareable document for verification and it can be used by any Aadhar card holder.To generate e-KYC, all you have to do is generate digitally signed UIDAI details of the user. This should contain mobile no., name , address, DOB etc.

Q- Can a foreign citizen apply and avail an Aadhar card?

Yes, a foreign citizen can avail an Aadhar card if he/she has lived in India for a total period of 182 days in a financial year. The Aadhar card would, however, not serve as a proof of citizenship of the foreigners.

Q- What is the cost of Aadhar card enrolment?

Aadhar card enrolment is free of cost. No fee is charged from applicants applying for an Aadhar card for the first time. However, if any update is made in the card, a fee of INR 50 would be applicable.

Q- Can a citizen of India apply for Aadhar card when he is residing in a foreign country?

NRIs can apply for an Aadhar card even when they live in foreign countries. However, to apply for the card the NRI should be physically present in India for submitting his biometric details.

In many cases it has been made mandatory to link Aadhar. The instances include mandatory linking of Aadhaar and PAN by the due date of 31st December, 2019.

Q- When is a blue coloured Aadhar card issued?

A blue coloured Aadhar card is issued when the applicant is a minor child aged 0 to 5 years. Once the child attains 5 years the Aadhar card becomes invalid. The child would again have to apply for a new Aadhar card which would be similar to other Aadhar cards issued by the UIDAI.

Q- How to update my address in Aadhaar?

Ans: An applicant can get his address updated in Aadhaar when he relocates to some other place. The address can be updated as many times as the person changes his address of residence. Here’s how to change the address in Aadhaar online:

Q- What will happen if I don’t update my address?

Ans. If the address is not updated, then the details of your aadhaar will not match with other IDs and Aadhar is the basic document. It can lead you to cost heavy.

Q- Can the mobile company store my biometrics taken at the time of SIM verification and use them for other purposes later?

Ans: No one, including, mobile phone companies can store or use your biometrics taken at the time of Aadhaar verification and linking. The biometrics are encrypted as soon as Aadhaar holder places his finger on fingerprint sensor and this encrypted data is sent to UIDAI for verification. Aadhaar (Authentication) Regulations 2016, strictly prohibit any requesting entity which includes mobile phone companies, banks etc from storing, sharing or publishing the finger-prints for any reason whatsoever and neither shall it retain any copy of such fingerprints. Any violation of this provision is a punishable offence under the Aadhaar Act 2016.

Q- What can I do if I don’t have any address proof accepted by UIDAI?

Ans: Yes, in the absence of any documentary Proof of Address (PoA) you can still update your current address in your Aadhaar with the help of an Address Verifier and by sending an online request for an Address Validation Letter. You can update the address where you are presently residing with the consent and authentication of the address verifier (a family member, relative, friends, landlord, etc.) who is willing to let you use their address as proof.

Q- How many days will it take for the address to get updated in Aadhaar?

Q- What documents can be submitted as address proof to get the address updated?

Ans: The following documents are accepted by the UIDAI as address proof for Aadhaar registration:

Q- The UIDAI has all my data including biometrics, bank account, PAN etc. Will it be used to track my activities

Ans: Absolutely false. UIDAI database has only the following information -
(a) Your name, address, DOB, gender, date of birth
(b) Ten finger prints, two IRIS scans, facial photograph
(c) mobile number and email ID .
Rest assured, UIDAI does not have your information about family, caste, religion, education, bank accounts, shares, mutual funds, financial and property details, health records etc and will never have these information in its database. In fact, Aadhaar Act 2016 specifically prohibits UIDAI from controlling, collecting, keeping or maintaining any information about the purpose of authentication either by itself or through any entity.

Q- Why am I being asked to link all my bank accounts with Aadhaar?

Ans: The government has made it mandatory for financial institutions, including banks, to verify and link Aadhaar of their customers with their accounts. After the Supreme Court's order, the deadline to link Aadhaar with bank accounts and other services has been extended indefinitely till it gives final verdict. 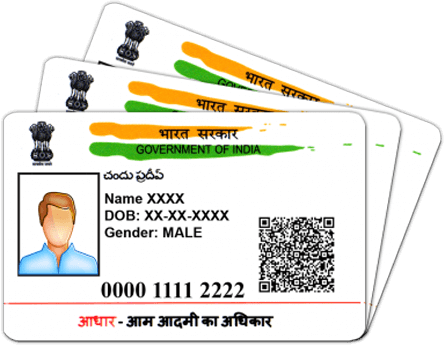