Income tax department sends the intimation notice u/s 245 to take confirmation from your side for offsetting the pending tax to be paid by you for any of the previous years from the refund of the current year.

What exactly is Intimation u/s 245?

Intimation u/s 245 is issued by the Income Tax Department to intimate you that they are adjusting your previous year’s pending tax payable with the current year’s refund.

Section 245 gives the Income Tax Department power to adjust any previous year’s demand of tax payable with the current year’s refund. But to exercise this power, it’s mandatory on their part to send intimation u/s 245 to the tax payers and give them opportunity to submit their response on it whether they agree with it or not.

For example, Income Tax Department had raised a demand for tax of Rs 21,000 from Mr. Sharma in the F.Y. 2012-13 after he filed his return. Mr. Sharma did not agree with the demand as the department did not consider his TDS. So, he simply filed for rectification u/s 154 for it and lived peacefully thereafter.

Then came F.Y. 2016-17, Mr. Sharma like every year filed his return, but this time with a refund of Rs 15,000. But instead of getting refund, he got an intimation from the Income Tax Department u/s 245 stating that his refund of Rs 15,000 is being adjusted with the demand raised by the department in the F.Y. 2012-13. This gave Mr. Sharma the goosebumps of the F.Y. 2012-13 when he struggled with that dreaded demand of Rs 21,000 and after consulting with professionals had filed a rectification u/s 154. Apparently, Income Tax Department did not agree with the rectification u/s 154 at that time, and the demand still remained.

Okay, so you’ve received the Intimation u/s 245, now what shall be done?

Once you receive the Intimation u/s 245, read it in and out and check all the details along with the time mentioned within which you can take any action (generally it’s 30 days) because if you do not take any action then the outstanding demand as on that date will be considered for adjustment against your refund.

Now, there are two possibilities, either you agree to the outstanding demand or you do not.

In any case, it’s advisable that you take the advice of a Chartered Accountant before taking any action.

What is the process for checking/verifying details of Outstanding Tax Demand ? 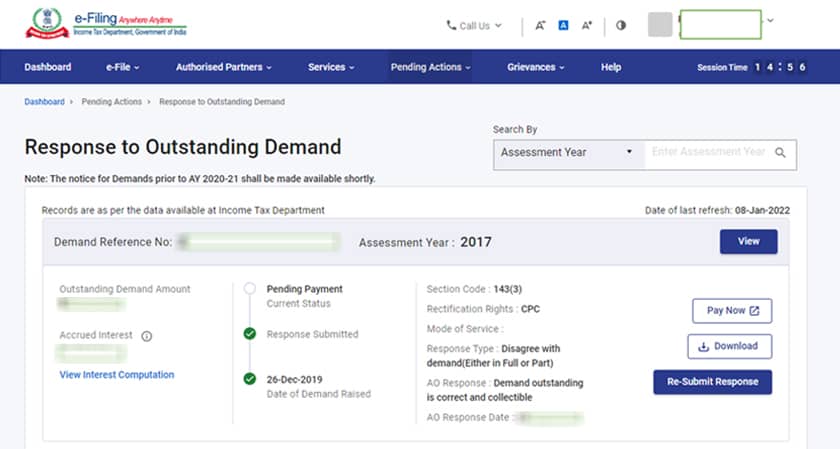 Step 3 : Given below screen will display and you can check the details from here. 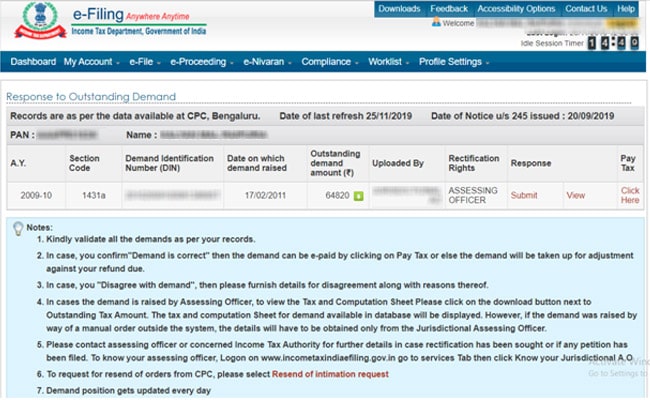 What is the detail procedure to file online response ? Step 4 : After submit, you will be taken to given below screen and 4 options will be displayed.

Option 1 : Now if you click on Demand is correct

If assessees selects “Demand is correct”, then a pop up is displayed as given below. Click on submit button and a confirmation message is displayed on the screen for accepting the demand and –

If a refund is due, the outstanding amount and the interest will be adjusted against the refund due. Otherwise, you must pay the demand immediately.

Now enter the amount which is correct, then click on submit and given below screen will be displayed along with incorrect amount which will be auto populated

Now assessee has to select any reason of disagreement, based on reason selected, assessee needs to provide additional information as below:-

Select the appropriate reason.Reason are similar as available under ‘Demand is partially correct’.and discussed above

Option 4 : Demand is not correct but agree for adjustment

What are the consequences of not filing response?

If no action is taken within 30 days of this notice u/s 245, the outstanding demand will be considered for adjustment against your refund after considering interest on demand. Interest shall be charged on principal demand pending of relevant assessment year. The demand of interest will be adjusted against refund without any confirmation of the assessee.

How to finding Jurisdictional Assessing Officer ?

Step 3 : Click on PAN details and given below screen will appear 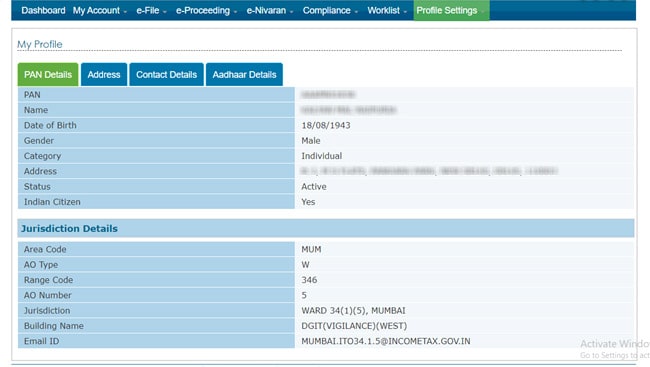 How to Respond to the Assessing Officer?

Since the response is being made online no separate compliances in respect of responding to the Assessing Officer are required to be made unless and until specifically asked upon to do so by the Income Tax Department.

Did you receive tax notice? Let us help you respond to the IT Department.

- Tax2win has expertise in responding to Income Tax Department

- Our experts would help you avoid legal consequences by assisting in responding accurately.

Help Me with Tax Notice

Q- How do I change my refund outstanding demand?

Q- Can Income Tax Dept. issue a notice under Sec. 245 for a previous year after awarding Certificate of Appreciation for a subsequent year?

Ans. Yes, Notice u/s 245 can be issued by the Department.

Ans. No, Section 245N(a) is applicable to Non-resident.It is only applicable to a certain category of residents (including public sector units)

Q- What happens if I don't respond to the notice within 30 days?

Ans. If the notice is sent by Assessing Officer and not responded in time, the assessee can attract a penalty. 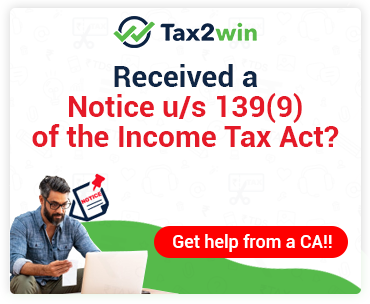