With the introduction of GST in indirect tax regime, a special emphasis has been laid on smooth and transparent transportation of consignments. One such measure adopted by the government to implement its vision is e-way Bill. E-way bill is a document which is required to be generated before transportation of goods begin. It is also required to be possessed by the vehicle driver in case of any enquiry during the course of transportation or anytime after.

What was the need to introduce consolidated E-way bill?

Normally for transporting each consignment a seperate e-way bill is required. But, with its manifold benefits a practical problem arose. In case a supplier was carrying multiple consignments in a single vehicle it arose difficulties to carry multiple e-way bills. To resolve the same consolidated e way bill came into frame.

What is consolidated E-way bill?

When is consolidated E-way bill generated?

In situations where the transporter is transporting the consignment of multiple parties. Then after generation of multiple e-way bills by the parties(whose goods are being transported in a single vehicle), for convenience purpose , there is an option for the transporter to generate a single consolidated e-way bill. The consolidated E-way bill is generated prior to the movement of goods. Form GST EWB-02 can be used to generate the same from the GST common portal.

What are the various types of Consolidated e-way bill?

Following are the various types of consolidated e way bill given on government  e-way bill portal: 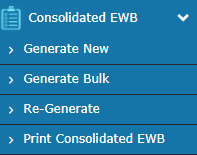 A user should have all the e way bill numbers of the consignment, which transporter shall transport in one conveyance. For generating consolidated bill, user needs to follow these steps:

After successfully processing the JSON file, the system will generate the E-Way Bills and the consolidated EWB for each request will be shown. Otherwise error report will be generated.

Now we will understand that how can we print the consolidated e way bill. Let us understand the step by step process