Form ITR-4S has been discontinued From A.Y. 2017-18, however, in the place of ITR 4S, you can file ITR 4. Now Form ITR-4S and ITR 4 is interchangeable. ITR-4 is required to be filed by those who opt for presumptive business having total income of INR 50 lakhs or less. It can be filed by individuals(resident ), HUF and firms (other than LLP).

We have already understood the cases in which Form ITR 4 can be filed. But, there are certain categories of the assessee under the income tax act who cannot file this ITR 4 form. This form is not applicable to individuals who are either.

Finding it Difficult to File ITR Yourself?

Hire our Smartest eCA's to File Your Income Tax Return and Get Maximum Refunds.

Let us now understand ITR 4- Sugam, form in detail for each of its categorized parts.

Now comes the part for the calculation of Gross Total Income.It is the aggregate of income calculated under all different heads of Income.

Now, allow for deduction under Chapter- VIA of the Income Tax Act 1961. The quantum of such deduction is based on the amount invested by the assessee. 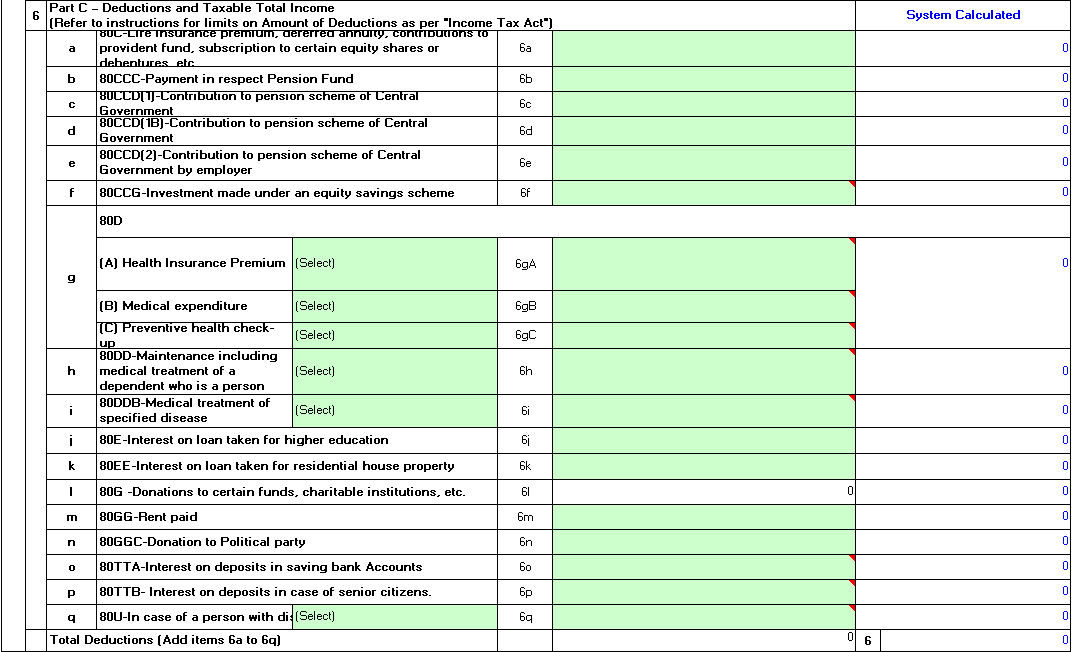 Now, calculate the tax liability based on the tax slab applicable to the income group of the assessee. And allow for Rebate u/s 87 A if income is less than Rs. 3.5 Lakh. And allow for Relief u/s 89 in respect of salary arrears received.

The schedule for calculating Business Income is as follows: 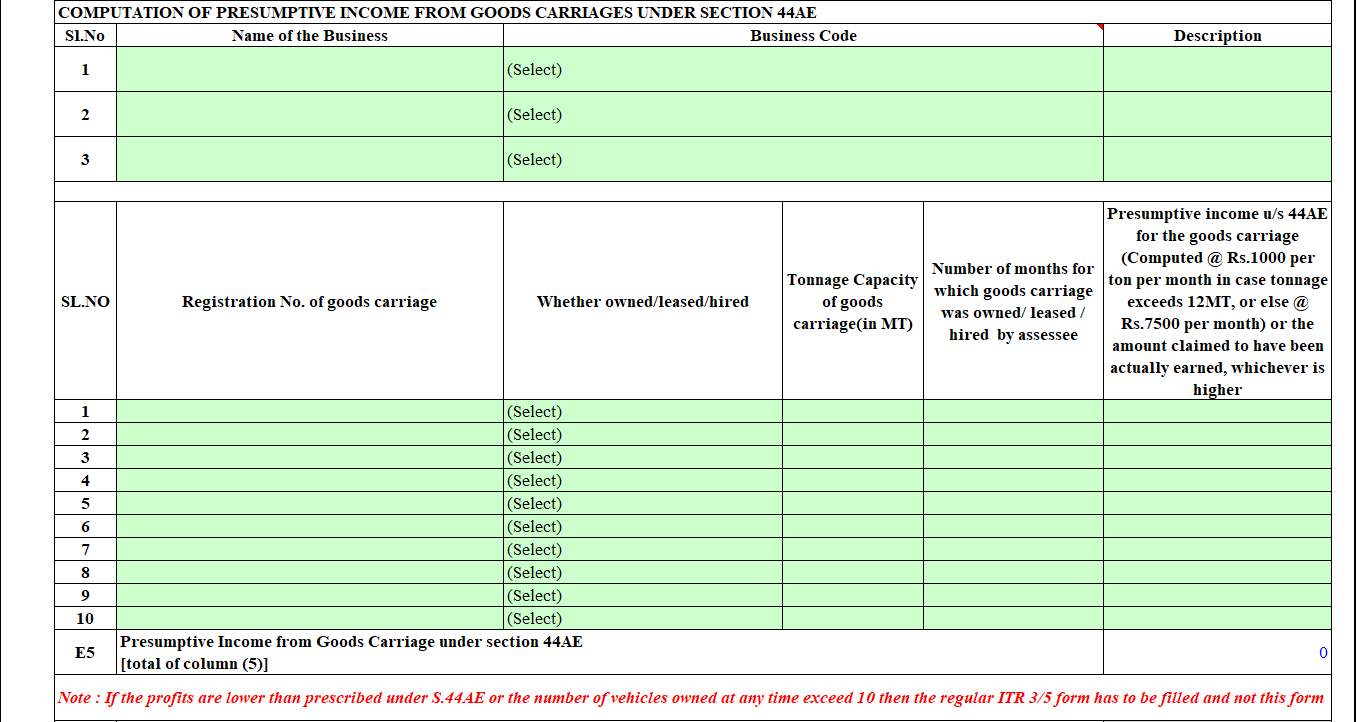 Part 19 is related to the Tax Deducted at source from salary. This schedule is populated using the Form 16 issued by the Employer. It incorporates details such as:

Part 20 TDS 2(i) is for TDS on Income other than Salary as per the Form 16A furnished by the deductor.

Part 21 is for providing details regarding the payment Advance Tax during the year and self-assessment tax paid at the end of the period. This Schedule requires the assessee to fill the information given on the payment challan such as BSR Code, Serial Number of Challan, date of payment, amount, etc.

TCS Schedule 22 consists of details regarding the Tax Collected at the source and as mentioned in the Form 27D issued by the collector.

Part 21 is for providing details regarding the payment Advance Tax during the year and self-assessment tax paid at the end of the period. This Schedule requires the assessee to fill the information given on the payment challan such as BSR Code, Serial Number of Challan, date of payment, amount, etc. 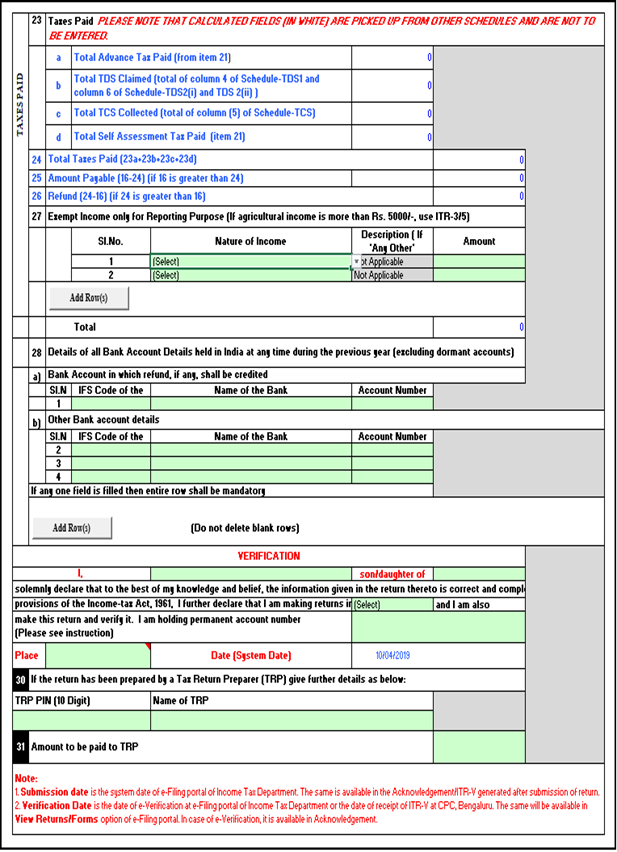 The Last schedule is to calculate the total amount of deduction to be claimed under section 80G for contributions/ donations made to the charitable institutions.

ITR-4 is used by those who have presumptive income, salary, capital gain, exempt income more than INR 5000, income from house property, income from other sources.

Q- Is it compulsory to file the ITR4 form for 5 consecutive years once filed in a particular year?

Ans. If taxpayer is opting for Presumptive scheme as per section 44AD then he/she shall have to file ITR4 for 5 consecutive years.

Q- The new ITR-4 is requiring GST as mandatory to file an ITR. But I have not registered under GST. How should I file my ITR?

Ans. ITR 4 can also be filed rather if taxpayer is not registered under GST Law.

Q- What are the key changes in the ITR 4 utility released by Government of India for filing Income Tax return of A.Y. 2019 - 20?

Ans.In New ITR4, individual taxpayers who have presumptive income and also hold directorship in companies or hold shares of unlisted company will not be eligible to file form ITR-4.

Q- If a businessman has filed ITR 4 for previous years and now he wants to file ITR4S, can he switch (he is covered under the presumptive scheme)?

Q- Can I file the ITR-4S form in place of the ITR-4 if I already filed the latter?

Q- What is the procedure if I submitted the ITR-4 form instead of an ITR-1 form?

Ans. If the wrong ITR Form has been filed , then the return is a defective return, to make it validate file the revised return.The last date for revised return is the end of the relevant assessment year

Q- I am salaried person. I also deal in share trading. Which ITR should I file?

Ans. ITR Form will depends whether the taxpayer intends to show share trading as capital gain or Business Income.

Q- Which ITR (1 or 4) form has to be filed if a doctor gets a salary from a private hospital and also receives the form 16A?

Q- How should I file an ITR-4 if the only income I have comes from tuition and house rent?

Ans. Taxpayer can consider his tuition income as business covered u/s 44ADA, and can file his return accordingly.

Q- Can I file the ITR 4 under 44ADA if I filed the ITR 3 last year which was the first year of filing? The 5 years limit is for 44ADA as well.

Ans. Yes, Taxpayer can file ITR 4 if s/he filed ITR3 last year and the limit of 5 years is not applicable on Sec. 44ADA.