What is the audit under GST and its types?

As per section 2(13) audit” means an examination of records, returns and other documents maintained or furnished by the registered person under this Act or the rules made thereunder or under any other law for the time being in force to verify the correctness of turnover declared, taxes paid, refund claimed and input tax credit availed, and to assess his compliance with the provisions of this Act or the rules made thereunder;

Let's understand the meaning of audit in simple language, audit is

What are the different types of audit under GST?

Audit under GST can be categorised into these three categories

Who are required to get their accounts audited under Turnover based Audit ?

Each registered person is required to get his accounts audited whose turnover during a financial year exceeds Rs. 2 crore by a chartered accountant or cost accountant.

After reading this, one may come up with so many confusions like whether turnover has to be considered branch wise or PAN based Whether exempt supplies also included in the calculation of turnover and so on

Let’s understand "What is the meaning of Turnover "

The definition of turnover is not defined anywhere under GST law however the meaning of Aggregate Turnover is given under section 2(6) which define the turnover as follows :

of persons having the same PAN, to be computed on all India basis

In the absence of any definition of turnover in the Act, and specific reference of the term ‘aggregate turnover’ gives indication that turnover to be considered at all India level.

What are the key points under GST audit ?

1. Which documents are required to be submitted under GST Audit?

2. What is the need of Reconciliation statement ?

The need of reconciliation statement arises as the annual return is prepared based on transactions reported during the year in various return wherein supply of all nature required to be reported, whereas the books of accounts maintained based on seperate principles.

There may be many transactions which may take place in Annual return but not in the books of accounts like treatment of trade discount, credit notes, unadjusted advances, unbilled revenue etc. hence the reason to bring reconciliation statement is to find out the differences and reasons for such differences. 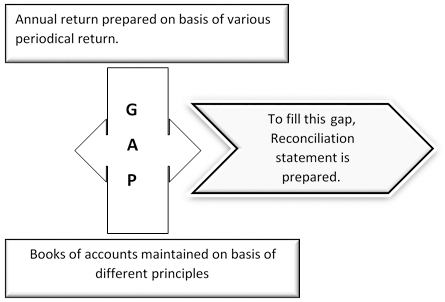 4. What is the penalty of non-compliance under GST Audit ?

What is the difference between GSTR 9 & GSTR-9C ?

What is the structure of GSTR-9C

The reconciliation statement is divided in two parts :

Part A : It is further subdivided in 5 parts

Part III : This part deals with reconciliation of taxes paid

Part IV :Reconciliation of Input Tax Credits as per books of account and ITC as declared in the Annual Return

Part V : This part requires the auditor to recommend additional liability arising due to non-reconciliation. The additional liability has been mentioned separately under various categories of rates of tax, input tax credits, interest, late fees, penalty, any other amount not included in the GSTR-9, erroneous refund to be paid back and outstanding demands to be settled.

GSTR-9C can be downloaded from www.gst.gov.in, from offline tools under download tab.

Q- What are the documents to be enclosed along with GSTR 9C?

Audited financial statements are required to be enclosed along with audit report in Form GSTR-9C.

Yes, Form GSRT-9 & GSTR 9C needs to be filled separately.GSTR-9C is certified and digitally signed by a CA or Cost Accountant.

Q- Is it required for a Chartered Accountant to be registered as a GST practitioner to get certified the Form GSTR 9C?

No, it is not mandatory for Chartered Accountant to be registered as a GST practitioner to certify GSTR-9C

Q- Could the late fee be waived off in Genuine and special cases?

As of now, there is no such notification issued by the government but in future Government may waive off the late fee by issue a notification.

Q- Will a Registered Taxpayer who has exclusively exempted supply of goods or services exceeding Rs. 2 crores, would require to fill the GSTR 9C form?

The definition of Turnover is very vast. It includes exempt supplies as well hence in the above case,GSTR-9C is required to be filled